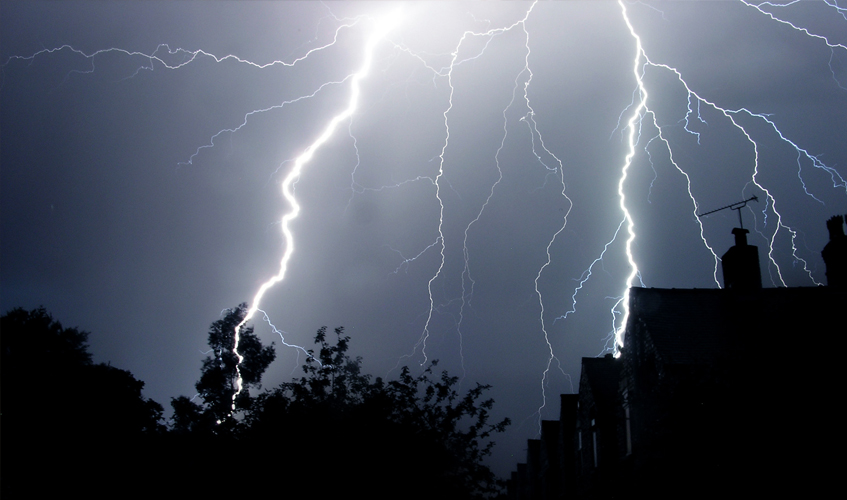 If your house has just been hit directly by lightning, your first port of call should be the fire services. Lightning can start fires in loft spaces and within walls of homes. These fires inside enclosed spaces may not be visible in their beginning stages.

Lightning's main objective is to find the path of least resistance from the cloud to deep into the ground. Most houses are filled with a vast array of routes for lightning to follow in its journey. These routes can typically include gas and water pipes, electric lines, phone lines, cable TV/internet lines, gutters, downspouts, metal window frames. Anything conductive in a house gives the lightning a path to follow. You need to keep in mind that lightning doesn't need conductive objects to reach ground. It's just forged its way through miles of air, so conductive objects in a house are a mere 'convenience' that it will use if they are available.

Lightning passing through a house will often 'branch' and utilize more than one path to ground at a time. It can also jump through the air from one conductive path to another in what is called a side flash. For example, lightning may first connect to electric lines in the loftspace of a house, then jump to better-grounded water pipes on the first or second floor. Lightning can connect to gutters, then jump to a window frame as a 'stepping stone' to the electrical system or water pipes.

The biggest danger lightning poses to a house is undoubtedly fire. Wood and other flammable building materials within a household can easily be ignited anywhere an exposed lightning channel comes in contact with (or passes through) them. It is most common for lightning to start a fire in the loftspace or roof of a house, as the channel usually has to pass through some of the structural material in the roof before it can reach a more conductive path such as wiring or pipes. When lightning current travels through wires, it will commonly burn them up - presenting a fire ignition hazard anywhere along the affected circuits.

If lightning chooses any of the home's electrical wiring as its primary or secondary path, the explosive surge can damage even non-electronic appliances that are connected. Even if most of the lightning current takes other paths to ground, the home's electrical system will experience enough of a surge to cause potentially significant damage to anything connected to it, electronics in particular.

Another major source of damage from lightning is produced from the explosive shock wave. The shock waves that lightning create is what produces the thunder that we hear, and at close range, these waves can be destructive. Lightning can easily fracture concrete, brick, cinderblock and stone. Brick and stone chimneys are commonly damaged severely by lightning. Lightning's shock waves can blow out plaster walls, shatter glass, create trenches in soil and crack foundations. Shrapnel is a common secondary damage effect, with objects sometimes found embedded in walls!

It is nearly impossible to provide 100% protection to sensitive electronics from a direct lightning strike. During a storm, it is highly recommended that you unplug any high-value item you wish to protect. Items such as surge protectors and UPS units do not provide direct-strike protection. Some could argue that the risk of a direct strike to any given house is too low to justify unplugging everything for every storm that passes overhead.

We recommend that you make sure your home insurance covers lightning damage. Making sure your electronics are insured is a good idea. These items can be replaced but consider irreplaceable items such as the data saved on your computer (photos, videos, work files, etc). You can mitigate that risk by performing frequent offsite backups and/or storing data on an external hard drive that you can unplug when needed.

The Environment Agency is starting a project to repair a flood wall in Sprotbrough, Doncaster, to protect homes and businesses from the devastating impacts of flooding.

Flood defences in Devon and Cornwall are becoming chattier than ever, engaging passersby in conversations about flood risk and plastic pollution.

The rescue of one of the North East’s great historic houses in now complete after a four-year, £7.4 million project.

Concerned about damaged pipework in your home? Got a leak you cant find? Suffered fire damage to your home? Need some help with your household insurance policy? Why not have a look through our advice centre for assistance.

We'd let the place go since our family left home, so somewhat guiltily we asked Tempest ...